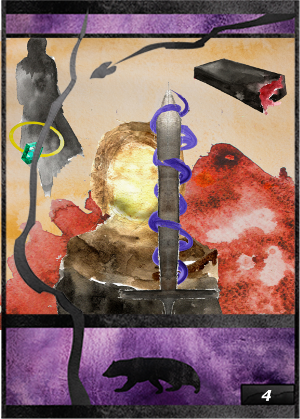 Website Episode Links:
One
Two
Three (not exactly an episode, pending)
​Four (this page, below)
​Five

The opening part of this episode can be found in the ebook or as an NFT.  You may also have read it in the collection A Clean Death.
And then...
“So?” asked Dave the badger.  “What do you think?”
Chloe bit her lip, frowned.
“It was okay, I suppose,” she said, sounding only half-convinced.  “Are you sure you’ve got this right?  Really?”
The badger rolled his eyes.
“Of course I’m sure,” he replied.  “You don’t know how often she brought me here!  The girl was obsessed.”
“Must have been,” Chloe muttered.  “If she kept coming back to this silly thing.”
The badger looked slightly - very slightly - miffed.
“What do you mean?” he replied.  “It’s a very nice story.”
“It’s fine, I suppose,” allowed Chloe.  “If you like that sort of thing.”
“Ah, but she did like it,” said Dave.  “Very much, in fact.  It was her favourite, like I said.”
Chloe bit her lip thoughtfully.
Below her, the chaos stuff of which the story was made hummed and fluttered, caught in the space between two narrative cycles.  Chloe could see the vague after-images of some of the more prominent story elements, balanced halfway between collapse and rebirth.  That was one thing she had learnt early on: stories went on for ever, if you let them.  It took an effort of will to keep them from winding themselves up again the moment they had finished, to stop them from spilling on endlessly.  Fortunately, the ability to stop a story spinning endlessly was one she had apparently retained, whatever the powers that bastardly other version of herself had stolen.
“She was that kind of girl then?” asked Chloe, a thought skimming half-formed on the surface of her mind, fluttering on the edge of precipitation, frustratingly just out of reach.
“Hmm?” asked her badger.
“The kind who has favourites,” Chloe clarified.  “I mean, I only knew her for about - what? - ninety seconds.  But I formed the definite impression she had only one favourite, and that was herself.”
“That’s not fair,” said Dave, and to her surprise, Chloe saw he actually seemed rather hurt.  “She wasn’t…well, if you think she was just all evil, then you’re missing a lot.”
“If you think anyone is just all anything, you’re missing a lot,” Chloe countered.
“Well, precisely,” sniffed her badger.  “The point is…”
But he trailed off, and stared at the thrumming story, a troubled look on his face.
“What?” demanded Chloe at length.
Dave the badger shrugged.
“I thought she was the one,” he said simply, and Chloe flinched at the same stab of cold jealousy she had felt before.  “Sorry, I know you don’t want to hear it.  But I did.  For quite a while, actually.”
Chloe snorted.  It was a good snort.  It managed to convey maximum derision in combination with not inconsiderable quantities of snot.
“No, really,” said Dave.  “She was…well, she was strong, obviously.  Brave, too.  Clever.  Kind.”
“Sounds delightful,” said Chloe.
“Also not especially sarcastic,” said the badger pointedly, then hesitated.  “Well, not to begin with,” he amended, and again clamped up, looking troubled.
“If she was so great, then what went wrong?” she asked, with more venom than she intended.
Dave looked at her, eyes large and dark.
“She was strong,” he said carefully.  “Just not strong enough.  To stop…to not be damaged by the things she saw.  The things she had to do.”
Chloe blinked.
She thought of the things she had been doing over the months since she had become the Power Badger.  Most of them had seemed natural at the time, but there had been some tough choices.  Stories didn’t always want to work out the way she thought they should.  And yes, sometimes she wasn’t 100% sure that what she was doing was right…but then, no-one could be 100% sure of that…could they?
Her badger was looking away, but Chloe got the sense he was still watching her, out of the corners of his big, dark eyes.
What was he thinking, she wondered?  What did he think of her?  Was there a part of him that wondered…but no.  Surely not.
Surely she, Chloe, was doing things right.  Surely she wasn’t being damaged by the role, the way that horrible other version of herself had been damaged.  Surely…
“Anyway,” said Dave, with a loud sigh.  “The point is, this was always one of her favourite stories.  Maybe there’s a clue or two here.”
“Hmm?” said Chloe, shaking her head and forcing herself to focus on the problem at hand, which was in fact much more comfortable than focusing on the problem of if she had not just lost her moral compass, but smashed it beyond all possibility of repair.
“You know,” said Dave, “something that might prod us in the right direction.  Give us a hint of what she is up to.  What would you do if you were her?” he added, ironically.
Chloe looked at the story once more, forced herself to think about the substances of it, the layers, the composition.
“Well, there’s nothing I find too objectionable about it, I suppose,” she allowed reluctantly.  “Doesn’t seem too unbalanced.  Makes me wonder what she saw in it.  I thought the Power Badger was meant to bring balance to the Storystream.”
Dave shrugged again.
“Maybe there was something in it she found compelling,” he suggested.  “Or someone.”
Chloe nodded to herself.
An idea had occurred to her.
“Maybe,” she agreed.  “I wonder…”

How do we open up the next episode?  And what will it be?

A note on interacting:
You can find more information on interacting in the NFT and eBook versions of the episodes.
Basically, you can interact / manipulate a story / suggest an answer to a puzzle / suggest a way a story my evolve by commenting below.